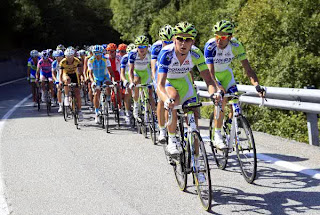 Today i was back at work in the tour of padania in northern italy. A race of significants of sorts in that it is a political statement of north v's south of italy with the north wanting the region recognized as seperate from the south. In light of this and the fact that italians seem to enjoy there controversy we had one road block of pro padanian region protestors and as i was riding on the front at the time working on pulling back the days early break i was in no mood to stop and listen to there gripe and just plowed on through giving one dude who got a little close to me a good old fashioned rugby style palm off in the process, i do apologise to the said man if i caused any injury to you however in my opinion there is now place for such behavior of protestors in the sporting arena. So this was certainly a first for me experienceing this type of rd block and i am sure it wont be the last this week infortinately so my aussie football argy bargy skills will likely be required again!!!

So with this north v's south significants of the race it is only fitting that the race is also the next edition of an even greater north v's south rivalry, that being for the Tassie Cup and north of the state aka being matt goss and wez sulzberger and south being my goodself set to do battle over the 5 stages of padania. I dont want to be a winger but i certainly have the odds stacked against me, not only are these two guys that far ahead of me in class, skill and power on a bike but also there is 2 of them and they are on the same team, the aussie national team as they build toward the world championships. I have another big dissadvantage in that i am merely a dish pig in my team and as such my role is the long hrs on the front of the peleton controling the break for out team leaders which for this race are elia viviani and Ivan basso. Anyway no excuses and i will do my utmost to uphold some honour for the south and vow to fight the boys for the cup in any way i can all the way to the finish in venice on saturday.

Now finally to the race and it was a pretty run of the mill day for me. Being my first day back after the broken rib i was hoping it would pan out as i did all and i could get the rythm back into my pins. An early break went of 3 guys and after the gap got to 9min after 30km of the 170km stage i starting riding alone on the front and it was a bit bathurst style for the 1st couple of hours with my first stint being 30km solo to get the break back to 6min and then arrived the help of a teammate where we shared more managable 10min stints till the first climb at 100km gone. We were controling the race for an anticipated sprint finish for our inform sprinters elia viviani and danial oss. Once we hit the hills i started to feel good and top of the final hill with 40km to ride the gap was back to 3min and nice and manageable for a fast decent and run into the finish. I pulled on the front until about 5km from the line when i just could not maintain the ever increasing pace no more so after 150km working on my suntan either on the front or second wheel behind my teammates in either paolo longo and alessandro vanotti, i enjoy a nice casual run into the finish while ivan basso, bodnar, oss and sabatini delivered elia to a very close 2nd place behind sacha modolo of colnago.

So all in all was a good day, i am happy with my condition post the fracture, i seem to be able work as i did before i had the lay off so happy the hrs on the ergo trainer achieved somthing. I am looking forward to tomorrow where i hope we can deliver elia a little better and perhaps help him to a victory. As for the initial day of the tassie cup i have no idea where the other two finished as i was a little in my own world following the work on the front, i will certainly check the classification tomorrow and see where it all stands, nothing quite like a bit of north v south rivalry!