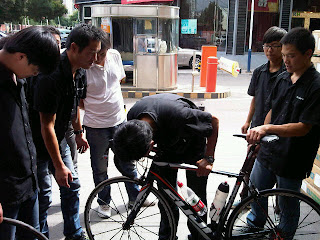 Yesterdays was one of those days on a bike where there is endless drama. I am now in xining, the capital city of the qinghai region of china on the fringe of the tibetan plateau preparing for the tour of qinghai lake. The city is at 2400m altitude and the race will take us as high as 4000m so the need to arrive early and try to acclimatise as much as possible Is pretty important. Yesterday was to be my final hitout before the race begins with a 6hr easy spin with a little intensity to open up the lungs and legs. So to the drama!

It started out when I was pumping up my tyres and I managed to break the valve! Flat number one and delay to begining training as I headed out on the rd.

On the road and feeling really good, excited about my trip to qinghai lake 100km away when down when the same tyre about 45' into the ride. Another change and underway, still feeling great and assuming bad luck done with.

Next was a careless error when doing a u turn after taking a wrong turn, front wheel hit a small divide on the rd and I hit the deck!! No damage just pride. By this stage I could only laugh at what had transpired in the initial 1hr 45min of my ride, anyway I soldiered on. All went smoothly as I climbed up toward the lake and did a little interval around 3000m high to see how the lungs would react, certainly found out racing up there will be somthing I have never experienced before but that excites me. So just as I finish my interval it starts raining and gets a little cold so I do the sensible thing and turn around, I am now at 3200m altitude, an elevation I have not ridden a bike at before and figure I have shocked my system enough and being 80km from home and in foreign country turning around seems logical.

As I trundle back toward civilisation down goes flat number 3, I can't believe my luck and thanks my lucky stars that at least the rain has stopped. Quick change as I am getting pretty good at them now and 60km to get home, I am now out of spares so really preying I get most of the way home before testing the quality of my training rims!!

Just as I feel I have dodged the bullet and 15km from the closest bike shop down goes the rear wheel for flat number 4, I am relieved its the rear as at least I still have the front to ensure I can steer properly which is kind of paramount when dodging the chinese traffic!!

Clunk clunk clunk I go along the city streets with all the locals staring now more intensely than usual, not only is it strange to see a white man riding a bike but to be doing it on a flat tyre is even odder for them to witness. To make things even more amusing for them only 7km from the shop down goes the front to make it flat tyre number 5 and the epic day of misfortune is complete.

I limp into the bike shop after 5hrs on the rd and fortunately due to the state of my bike no need for any explanation, 2 flat tyres, one tyre destroyed and no more spares there was no need to try and exlain what I was there for. The local mechanics quickly rush to my aid like a ferrari formula 1 team as the photos shows and I am back on the rd in no time for the final 1hr of my adventure which quite incredibly heralded no more flat tyres or incidence.

After the ride I was a little tired after enduring a 6hr ride which took almost 8 so I went of to the blind massage joint that our team translator had told me about and I had visited the day before. The guys there are completely blind but give the most incredible massage to get me feeling like new again, infact the massage was so good my legs had completely forgotten the days ordeal, the only lasting memory will be the skill fullness with which I can now change a tyre on my bicycle!!

Still 17 more days in the region including the big race so and certain the unexpected adventure will continue!!

Sent from my BlackBerry® wireless device