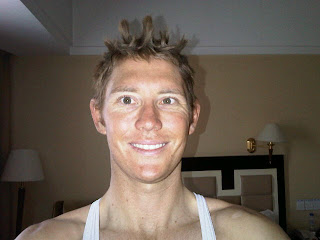 Stage 3 of china is done and dusted and by dusted I mean that quite literally dusted!! Head to toe in fact. I can not remember ever having not only my hair turned a light grey brown but also my feet. Yes the dust here or whatever they have in the air has a unique ability to not only get all over you but also infiltrate your shoes and socks!!

Back to the racing and we had again some simple objectives for what has been a very simple race thus far. Firstly was to set up our "speed machine" from malaysia anwa manan for the intermediate sprints should the group be together. Anwa Is perhaps my favorite team mate I have ever had, just having him around cheers everybody up. While he could be describe as a little lazy by many I beg to differ!! He is just a true blue through and through sprinter. He want waste a single lick of energy he does not need to such as you will often need to knock on his door for about 10minutes until you either wake him up or he has decided that you must really need him so he will raise himself from his royal rest and greet you at the door!! He is without a doubt a great character and one guy I love racing with! In malaysia anwa is a serious sporting star thanks to being the only malaysian to ever win a stage of there national tour, le tour de lankawi which he achieved in 2010. Why is this significant well I will explain. He is the regarded as the fastest and greatest rider from malaysia. Here in the tour of china there is also his old team from malaysia whom are determined at every turn to try and steel the kings thrown. Where he goes they follow!! Look in tour of china 1, one day anwa 4, another malaysian 5, anwa 30 another malaysian 31st and so it goes through out each stage it is so funny to watch!!

So back to the race and having anwa fighting for the blue sprinting jersey which he now leads has many benefits. Firstly it gets our super hero up on the stage every day and him a chance to try his charm on the podium girls. Secondly by him going for all the intermediate sprints also means taking time bonus's. This is where it has an extra benefit for us as with me 2nd on GC we don't really want anybody putting any time into me before the penultimate day TT. So with anwa sprinting away that means all his little buddies from malaysia also are going hell for leather for the intermediate sprints and swallow up all the time bonus's!! Its great, anwa is the star and maintains his malaysian superiority and I can stay in 2nd on GC!

Our other plan today was to set anwa up for the sprint at the finish which finished 4th in, oh and you guessed it a malaysian safely tucked onto his wheel in 5th!! but after winning an intermediate sprint he took the lead in the points classification so great day all round. I remain in 2nd so another rd stage tomorrow where I expect much of the same and the race of truth arrives on saturday with the 20km individual TT which will most likely decide the winner of the 2012 Tour of China 2.

this race has also been containing a much more challenging component than the race itself, that been long driving transfers before and after stages and also on designated days of racing which we have had 2 off this week. On both occasions spending 7hrs in the car. And that is where I wright from at this moment, a 250km transfer which we have been informed will take 4hrs despite the fact we have a full police escort and 6 lane wide HWY all to ourselves. Like everything here in china, it makes EVERYTHING EXCESSIVE. Anyways best get back to work directing our mechanic risto whom is driving of picking our way through the convoy so we win the race after the race!! The one to the best spot in the bike mechanics work area!!