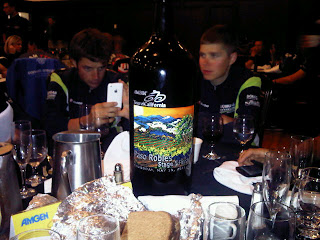 Today was a green day with a dominating victory by our liquigas cannondale sprinting spear head peter superman sagan. Today our team meeting was very clear with on objective, doing all we can to help him do it. Thanks to such a difficult course with roleing hills, wind and a narrow rd, it was a difficult day for the majority of the peleton, specially the sprinters. Yesterday peter showed he was perhaps the strongest climber of all the sprinters so we had plenty of confidence in his ability to pull of the win aslong as we could ensure it arrived in a sprint.

Everything worked out pretty well according to plan, a small move got away and fortunately a couple of riders high on gc were in the break away which meant radio shack had to control for yellow jersey wearer chris horner. This meant we delayed helping with the chase till the second half when our big locomotive and decending and flat land working specialist lended a hand on a flat fast slightly downhill sectio perfectly suiting him. From radio shack were keen to keep the break on a short leach and once ted began working the gap never went north of 3min. Next i subbed in with about 80km to go and when timmy duggan gave me a breather with 50km to the gap was a very manageable 1:45. Here we just kept the group dangling until we got a little to lazy and with 30km to go it was back to 2min 20sec and panic stations occured. Back to the front this time i was going full gas with my team mates damiano caruso, ted and francesco belotti and a couple of radio shack boys. Finally with 5km we had it pretty much back together and when a crash occured at 4km i sat up to ensure peter was safe but quickly realised as i drifed out of the front group that firstly the front group was now only 40riders and secondly and most importantly peter was right up the front and i was pretty confident at seeing this that the win would be his. I roled in with my other workmates in the second group just in time to see the replay of peters win on the big screen and as always when my team mates win, i was very very excited for him and the team. It certainly is a very satisfying team sport on days like today.

After yesterdays bomb out big time it was nice to be back in a role i am familiar with and working for the team leader, unfortunatly i have found out i am suffering from a chest infection which explains my breathing difficulties yesterday and general flattness. Just fortunate i can still assist the team when i am crook and i hope recover in the last few days and be stronger for the daupine.

All in was a seriously great day and one i wont forget in a hurry and perhaps the best part was sharing the 7litre magnum of red win peter got for winning, was an exceptional drop.

Tomorrow is the tt so looking forward to a day off with 2 hard stages to follow and finish things off at the 2011 tour of cali.